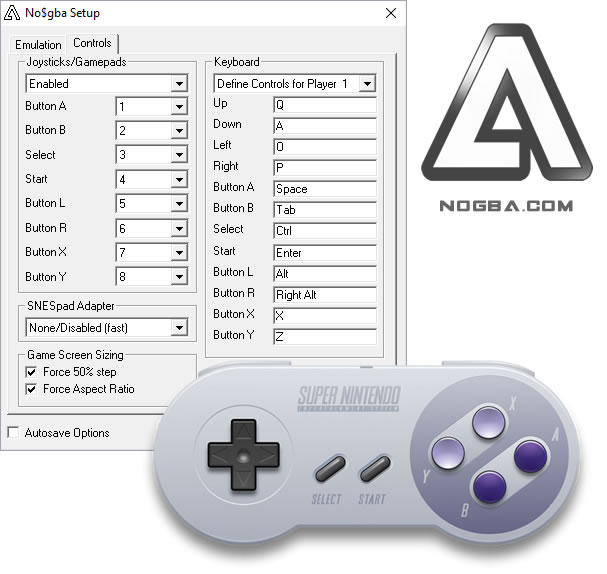 Download NO$GBA  pronounced as 'No Cash GBA' is a Nintendo DS / DS Lite and GameBoy Advance emulator for Windows 10, Windows XP and MS-DOS. NO$GBA options include emulating all known save types as well as and multiple cartridges reading. NoGBA supports multiplayer and is able to load multiple NDS ROM files for linking games. Multiplayer for GBA Games is also supported.

Even if you have NO cash you can play Nintendo DS and Gameboy Advance games. What you need is a PC, some NDS roms or GBA roms and No$gba emulator program. NoGBA will let your PC 'pretend' to be a game console and so you can play DS games with NO ca$h. www.no$gba.com. Emulator could be called NoNDS or No$DS, but as it was started as a Gameboy Advance roms emulator and only later acquired ability to play DS games it continues to be called No$GBA and not No$NDS or anything else like that.

Play NDS ROMs from Internet
Of all the NDS emulators No$GBA has the best compatibility with commercial DS ROMs. And of course it supports running Nintendo DS homebrew. With a little help from NO$Zoomer games can be played on full screen. No$gba may include zoom option for the screen in the new version 2.7 or 2.8, but untill then to make the screen bigger you have to use no$gba 3.2 with zoomer add-on application. Pokemon Black Fix. Pokemon White and Black version requires an action replay code to get passed the freezes. WinDS Pro DSi emu installation package includes the latest version of No GBA togather with the best add-ons.

The Nintendo DS is a cool gadget. It can play games, take and view photos, surf the Internet and many other features that come in this small package. The commercial Nintendo games are the best there is. The Nintendo DS is also famous for its innovative touch screen games; it revolutionized gaming and fun. But if and only for playing games, why not bring the Nintendo DS to the computer?

The idea of emulating gaming platforms is not new. Nintendo consoles such as Gameboy and  Game Boy Advance; and Sony's PlayStation and Playstation 2 have emulator versions for the PC. In late 2004, the prototype of future NDS emulator was released. 'NDS Emu', the first emulator, came with a demo file; it could not play commercial games. Of course, subsequent developments of the program were undertaken. Here is a list of Nintendo DS emulators available; they can be downloaded from the Internet.
Dualis, the second emulator released in 2005, is plugin-based for the Windows OS. Written in x86 assembly and C++, this emulator is able to record videos using the VFW encoding system. The output is in AVI file. However, the Dualis could not run dumps of Nintendo DS cartridges. The Dualis could be downloaded from

NO$GBA, is a freeware Nintendo DS emulator and the first one to do a successful emulation in its 2006 release. Originally a Gameboy Advance emulator, it is now capable of running both commercial and homebrew Nintendo DS games. Famous games such as Pokemon Diamond could be played, at full speed, with no glitches in graphics. The latest NO$GBA version is 2.9, while the 3.2 is available for those who would like to make a donation.
iDeaS, another successful Nintendo DS emulator, could also run commercial games for the Windows OS. With the OpenGL, iDeaS emulates ARM7 Gameboy Advance processor and ARM9 dual screen processor. It could run many commercial Nintendo DS ROMs, although with a bit graphical errors, such as the Pokemon Diamond & Pearl and Super Mario 64 DS. For the touchscreen, the mouse cursor is used.

DeSmuMe, meanwhile, is also an opensource DS emulator. Written in C++, it could play homebrew and commercial Nintendo DS ROMs for Linux, MAC and Windows operating systems. Aside from that, the DeSmuMe could also be ported and run to other platforms such as the Playstation Portable.
Ensata, another Nintendo DS emulator, also emulates the ARM7 and ARM9 dual screen processors. The mouse cursor is also used for the touchscreen. However, the Ensata is a cycle accurate emulator; meaning it could only test games which are in development and not play the commercial Nintendo DS ROMs.

So far, the technology of Nintendo DS emulation is still in development. Some of them could not still play all of commercial Nintendo DS games; a lot yet have graphical errors and low/high speeds. The most preferred emulator by the Nintendo DS fans is the NO$GBA. If only for gaming preference, why not download a Nintendo DS emulator instead?