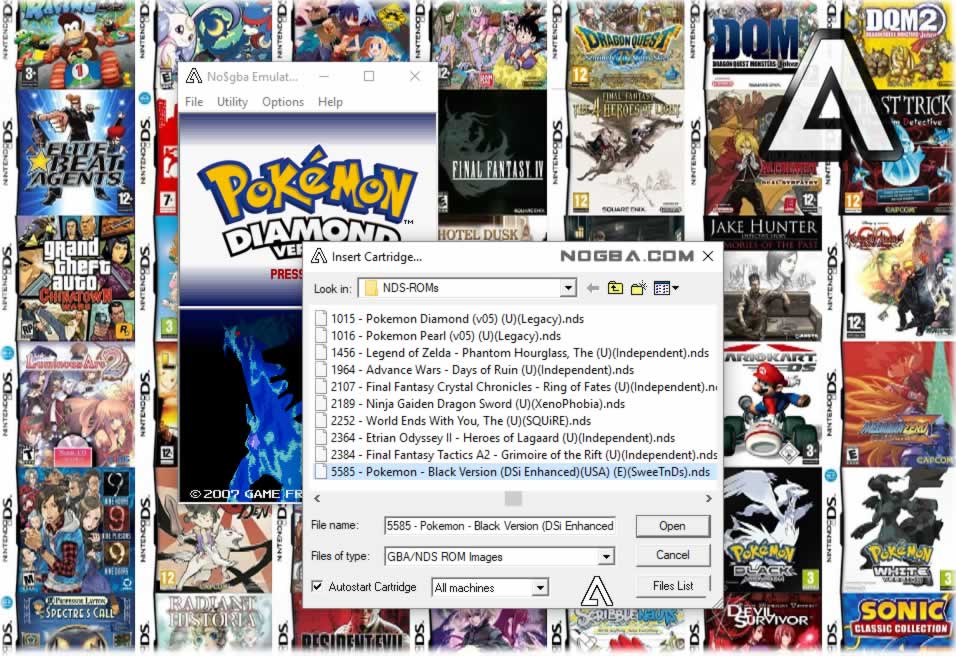 Can’t decide which version of No$GBA you should download? ⏳ If you are not a programmer and all you want to do is play some free NDS rom files and GBA games you should download No$gba Windows Gaming version. It has all the features needed for running your Mario, Pokemon and Zelda games. Now Windows debug version of the no$gba should be more interesting for anyone who would like to program for Game Boy Advance or DS or maybe do some deeper digging in how the games are made. Both versions are free so feel free to test them out.

So, You want to be a Game Boy Advance programmer, huh?

Good! More power to you! If there's anything the video game industry needs, it's more programmers, since more programmers means more games! Whether the GBA / Nintendo DS will be the first console system you've developed for, or the tenth, you could not have made a better choice. The GBA is especially easy to get into because you can program for it in the languages that we all know and love: C and C++. There's no Assembly required (Bah! Pun not intended, I swear!) like there is with the original Game Boy, or the convoluted hardware of the PlayStation 2. Additionaly, it's cheap! Heck, you don't even need Game Boy Advance hardware to program for it. Now, since you've made the decision to code for the GBA, here's what you're going to need to get started:

So, What do I need to get started?

First and foremost, you're going to need to need some knowledge in the C and/or C++ programming languages. If don't know C++ already, go read some tutorials, take a class, buy a book, whatever. Once you learn the language, it will be your most valuable tool for programming on virtually any platform.

Chances are, the computer you're on right now will be all you need. Hardcore Linux users will tell you that Linux is the only way to go if you want to program console games, but truth be told, Windows will do quite well. In this day and age when the gap between the *nix users and Windows users is increasing, the gap between the OSes themselves is greatly decreasing. Utilities like WINE let you run some Windows programs on a Unix/Linux system, and Cygwin allows Windows users to run Unix/Linux programs, too. So, whatever you're using right now will be fine. (unless you're on an Amiga or an OS/2 machine, or something wacky like that)

So, what programs do you need to write GBA code? Technically, you don't need anything more than a simple text-editor! Of course, if you decide to crank out code in Notepad.exe, you're just going to make your life a living hell. Windows users: Do yourself a favor and pick up something like Borland C++ or Microsoft Visual Studio. Linux users: Emacs is popular. :)

Now that you can write the code, you're going to need to compile it into a binary file that the GBA (or an emulator) can actually understand. Since the Game Boy Advance runs on an ARM processor and isn't in the x86 family, (i.e. 386, Pentium, P3, etc.) just hitting a "Build" button in Visual Studio (or whatever editor you're using) won't work. You're going to need to compile your code specially for the GBA with a handy program called GCC, or more specifically, ARM/Thumb GCC. Additionally, Windows users are going to need some barebones Cygwin files, since GCC is natively meant for Unix and Linux systems. (See Your Favorite Operating System above, if you don't know what Cygwin is.)

Create a directory anywhere on your harddrive, and call it something like "armgcc," or anything else that's easy to remember. Extract armgcc.zip, armgcc2.zip, and cygwin.zip into it. Within that directory, create two more called "include" and "lib." Move any *.a files from the "armcss" directory into the "lib" directory. Extract arminc.zip into "include." Finally, you need to create a special batch file. Name it setup.bat or whatever you want, and include a line like this in it:
path=[Path to armgcc directory];%path%

Now save it, and be sure to run that file before trying to compile anything, or nothing is going to work right!

Once you actually write and compile some code, you're going to need something to run it. Since, at the time of this writing, It is nearly impossible to get a Flash Advance Cartridge for GBA developers, this is where emulators come into play. iGBA and Mappy Virtual Machine are both excellent Windows emulators (Mappy has, by far, the most options) and VGBA is a DOS based emu that seems to have the highest compatibility with all the demos out right now, but as you might expect from a nogba site I would highly suggest you download the latest Windows debug version of the No$GBA emulator.

There! Now you're all set to start running your own Game Boy Advance code! Which brings us to our next section...

If you are interested about the No$GBA emulator (and some of its utilities), here are the most frequently asked questions related to it:

These are just the steps that you need to follow to make the No$GBA emulator work on your PC. After following these instructions, the emulator will be working fine afterwards.

Few quick questions and information in relation to No$GBA:
When loading savegame: You just have to choose the appropriate save file to properly save your games. Snapshots: Are only available for GBA mode games. Not possible with the No$GBA emulation. Linking, slot, and trading: The NDS Linking, Trading, NDS with slot, and Picto Chat are not yet available with No$GBA. New Version: Is not yet available. The developer of the emulation, Martin Korth, is not saying anything about it the new version yet. Sudden crashing of the game without reason: You just have to turn off the Sound option. Fixers: No$Zoomers fixers are only available with the 3.2 version. Other than this, it is not yet available.